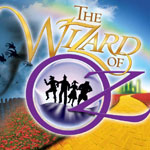 It is totally fitting that in celebration of its 75th Anniversary the Pit & Balcony Community Theatre would kick off their landmark season with an ambitious musical stage production of L. Frank Baum's classic, The Wizard of Oz.   Centered around ambitious and seemingly opposing themes of aspiration & arrival, identity and longing, dream and realization, in many ways Oz is reflective of the values Pit & Balcony itself strives to carve within the tri-cities, especially in terms of cultivating a sense of 'community'.

Chances are you have seen the 1939 MGM movie at one point or another in your lifetime. The Wizard of Oz has become a staple of American popular culture. Young or old, we know many of the famous, unforgettable lines spoken from the lips of these magical characters by heart: Dorothy, Toto, the Tin Man, the Scarecrow, the Cowardly Lion, as well as the munchkins.

But chances are even greater that you never realized that the original theatrical version from which the movie was based runs 60-minutes longer than the film; or that it's author, L. Frank Baum, wrote much of Oz while vacationing in Macatawa Park, a resort located along the shore of Lake Michigan.

For Pit & Balcony's production of The Wizard of Oz, the  'man behind the curtain', so to speak, is guest director Michael Walling.   When asked about the many varied challenges presented in assembling a distinctively unique production of this timeless classic, one becomes fully aware of how daunting a task it can be.

"OZ is perhaps the most well-known production in existence," reflects Michael, "so obviously we want to put some kind of 'signature' upon it. Our ultimate goal is to make it feel familiar but appear visually different. In terms of set decoration we are developing a more minimalist version than in the film. For instance, we'll have these very huge poppies representing the numerical expanse of the poppy field; or huge ears of corn representing a huge cornfield, so people get a sense of what it is through the height of the objects to be positioned in a place without boundaries."

"Undoubtedly, the biggest challenge of this production is staging it," continues Walling. "The Temple Theatre is a much larger stage and we have a very big cast, with 50 people, so we need to be inventive and really follow those four individuals for their entire journey."

While the original script for the play was penned back in 1907, it does mirror the movie to a large degree. "Because the script is older than the film, there are a lot of references people won't get, so we are eliminating some unnecessary things from the original play, along with a few musical reprises," notes Michael. "If we staged the original production in its entirely it would be over 3 hours long, which requires a certain listening skill, especially for children in the audience that come from a 'sound-bite' generation where everything happens very quickly.

Consequently, we're striving to make things brisk and cut long tracks & overtures, so our production should run a little over two hours. This keeps it fresh."

Assembling actors from Chesaning to Frankenmuth and parts beyond, Michael admits that apart from the many challenges in staging Oz, he was compelled by the dramaturgy embedded in the script.

"It's a very emotional story but it's also a musical, so I wanted to incorporate actors from the big circle of the tri-cities. We even have 21 children playing the munchkins and experienced a huge turnout for all the auditions."

In terms of its place in the lexicon of American theatre, what does Michael feel truly distinguishes Oz from other productions?

"There is a line of home and family running throughout, coupled with the notion that family doesn't necessarily have to be biological," he reflects. "Plus there is this adventure of travel, of looking beyond the gate yet feeling good to come back home. It touches all of those topics in exciting ways and encourages people to go up and beyond what they know, without forgetting what their family is.  That's why it's so potent. It reflects old world values and the theatre is not constructed that way today. The warm & fuzzy feeling has never left that musical, plus it carries universal messages." Pit & Balcony Executive Director Lee-Perry Belleau is equally thrilled with the excitement & opportunity that this production of Oz delivers to both his organization & the community.

"People that have seen Michael's work before will appreciate what he's doing with this, because he's always had a good sense of vision that nicely ties everything together. I'm hoping people will find it new and fresh, yet still the Wizard of Oz.  Plus, we are taking on advanced staging techniques. For example, the Wizard will go up in a balloon and the monkeys will actually fly."

"Normally, the budget for this show is what we would spend on an entire season," continues Lee, "but we felt it important to rise to the occasion in order to do the play justice. We couldn't perform it on the little stage at P&B, which meant moving it to the Temple. This has opened a whole new level for us, with a bigger cast, bigger music, and bigger everything.

We are also limiting the run in hopes that more people will attend each performance.

When asked his thoughts about this landmark 75th season for Pit & Balcony, Lee responds with one word: ambitious.

"When I started here a couple years ago we produced five shows and that's it. Then the Divas came in and did a fundraiser and the following year we had 13 productions going on, which is a huge undertaking. Add Oz into that mix this year and it's a huge undertaking, so I'm very excited about it."

"This is a theatre by and for the community, which is the bottom line," he continues. "Last year we did Stop the Violence, an anti-gang program, and this year we'll be doing a sequel, so I feel we are making an impact on our community.  Plus, this year we just did Crowns and are adding five mainstage productions, so we have a pretty full roster or classic and new material."

With membership doubling from two years ago and season ticket sales ready to surpass the previous year, all is looking good for Pit & Balcony as it celebrates its landmark birthday. "I'm very pleased with our progression, especially in this challenging economic climate," he notes. "We are doing renovations at the theatre that will open up more space and will create two rehearsal studios almost the size of our working stage, so we can make the main stage more available for other community events like The Mutt Strut, " adds Lee.

Pit & Balcony President Joyce Woods is equally reflective of the organizational teamwork that has propelled the theatre forward in the community spotlight over recent years.

"This is my second year as President," she notes, "but when I look at all the man and woman power we have combined in this organization, I feel that in itself is going to really mark this year."

"My real focus now is to look forward and assure that 75 years from now Pit & Balcony can celebrate its 150th anniversary.  Obviously, this requires financial security, which is why I'm thrilled that we've managed to open an endowment with the Saginaw Community Foundation that allows people to contribute to Pit & Balcony and guarantee the support of the theatre forever."

"The State of Michigan has designated certain entities that qualify for off the top tax credits," she explains. "With this fund at the Saginaw Community Foundation, if a married couple contributes $400.00 they can get a $200.00 off the top tax credit back from the state, while a business can give up to $10,000 and receive a $5,000 credit.  My hope is that coupled with the good will of our community, this development will assist in solidifying our organization well into the future."

"Arts add a dimension to our society that is so critical," she reflects. "If we just think of science and math we can't be the kind of human beings we need to be. Pit & Balcony provides a combination of the arts all in one - the visual, the musical, and the ability for people to get outside of themselves. That's why I believe in it so strongly."

"I want to make this 75th year of Pit & Balcony a celebration of our past as well as a time where we define ourselves for the future," concludes Joyce. "I'm very pleased with our Board of Directors and the people we have involved that are dedicated to making Pit & Balcony successful."