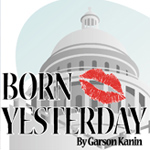 For their next winter performance of their 2014 season, The Bay City Players are busily shaping together the dramatic intricacies and comedic structure of Born Yesterday, which premiered on Broadway in 1946 starring Judy Holliday; and was also translated to film in 1950 and remade for contemporary audiences in 1993.

Written by Garson Kanin the narrative of Born Yesterday tells the tale of Harry Brock – and uncouth, corrupt and very rich junk dealer who brings his showgirl mistress Billie Dawn with him to Washington, D.C.  When Billie’s ignorance becomes a liability to Brock’s business dealings, he hires a journalist, Paul Verrall, to educate his girlfriend.  In the process of learning, Billie Dawn realizes exactly how corrupt Harry is and begins to interfere with his plans to bribe a Congressman into passing legislation that would allow Brock’s business to make even more money.

Apart from the disconcerting realization of how ‘timeless’ this storyline has become in contemporary America, there are numerous rich elements going for it that fan into several moral elements and questions that surface and interface together.

Recently I sat down with Director Robin Devereaux to discuss many of these elements, beginning with the qualities that she feels forge the backbone to this production and how she is approaching the rendering of this production for the Bay City stage

“First off, Garson Kanin's script is filled with one-liners and witty dialogue, which is not only fun for the audience, but for the actors as well,” she states.  “While we are keeping the play's setting in 1946, the timeless subject matter (corruption in Washington) makes the play fresh, fast-paced and exciting even today. Set in a swanky Washington hotel, we are introduced to Harry Brock, a blustery bully, who's come to the Capitol to buy a senator in order to swing his shady dealings with the government his way. When his bombshell girlfriend, Billie Dawn, embarrasses him in front of the Senator and his wife, Harry hires reporter Paul Verral to "smarten her up", but Paul does more than that: he also teaches her a little bit about morals, the difference between right and wrong, and steals her heart as well in the process.”

“The challenge with this play, as in any comedy, is close attention to timing and the visual gag. As the actors get their lines down, the fine-tuning of that timing comes into play, and the really hard work of comedy begins.”

The production also features Tom Dewey and Janet Dixon, long-time members of BCP, as Senator and Mrs. Hedges, P.J. Burke as Brock's hapless cousin, Eddie, and newcomer Martha Stewart as The Assistant Manager. Add to this a fine array of actors who play the hotel staff, some of whom play multiple roles; Sarah Green, Alex Alexandrou and Tom Vassallo. Plus, Stage Manager Susan Ross steps in as well, as an additional bellhop.

“Auditions this time of year are tough,” reflects Robin. “Folks are busy with the holidays and the weather outside has been frightful - but we made it through a short and sweet audition process and are blessed to be wonderfully cast.”

“I applied to direct this show last year during the planning of the season,” continues Devereaux.  “I had fond memories of the 1950 George Cukor movie starring Judy Holliday (who was hilarious, Broderick Crawford and William Holden. Comedy is tough, but I love working it. My directing resume includes, most recently, God of Carnage and Steve Martin's The Underpants, which were produced at Pit and Balcony Theatre, and Charly's Aunt, Jeff Daniel's The Vast Difference and Squabbles, all BCP productions.”

Seeing as Born Yesterday resurfaced in a couple different revivals on the Broadway stage, first in the late 80s and then again in 2011, why does Robin feel it has been able to translate to successfully to different generations, first in the 1940s, then in the ‘80s, and now in recent years?

“There are a couple really important, relevant themes at play in Born Yesterday that enable it to translate to the stage (and screen) over and over again. First off, the aspect of bullying is prevalent, as Harry Brock verbally and physically man-handles the petite and beautiful Billie Dawn,” explains Robin. “Not only does he bully Billie, but everyone he comes in contact with as well: his washed-up, booze-soaked attorney, Ed Devery, his cousin, Eddie, who he's turned into a man-servant, the Senator Norval Hedges and the hotel staff. News reporter, Paul Verral, however, refuses to be bullied, and taking inspiration from him, Bille comes into her own as well.”

“Another theme is the importance of education and what it can do for you. As Billie gets "schooled" by Paul she begins growing as an individual and springs from the mold Harry has created for her and begins to understand there is a better life out there for her.”

“For me the biggest challenge is the time factor,” concludes Robin. “This production time-slot is always difficult because we run into the holidays and must take some time off for that. Also the weather is a challenge, with the cast from varying locations. We've had to call off rehearsals due to weather already, and are hoping for no more of that as opening night approaches, but you never know. I am confident in my cast, however. They are a great bunch of folks who are theatre-savvy and are also very responsible about the roles they've accepted. I anticipate an awesome show!”

The Bay City Players’ production of ‘Born Yesterday’ will take place from January 24 – February 2nd. Tickets are available online at BayCityPlayers.com or by phone at 989-893-5555.