Bonnie Raitt Lights Up the Inaugural Night of Matrix: Midland 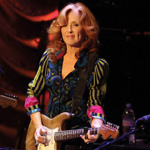 It's been a good 3 years since the Grammy Award winning musicianship of Bonnie Raitt graced the performing stage; and her appearance at the Matrix: Midland festival on May 22nd was the stuff that legend and memories are made of.
Touring behind the recent release of her 19th album, Slipstream, Raitt was in fine spirits and polished form as the unmistakable timber of her lush and pristine vocal range wrapped emotive clarity around each syllable that she sang, while those nimble fingers traveled over the fret-board of her guitar, proving to the sold-out crowd that Raitt's signature slide-guitar playing is distinctly singular and unmistakably occupies a class all it's own.  Indeed, as opening act Marc Cohn noted, “Bonnie is such a class act that it's easy to forget what a badass she is.”
Commenting that she'd been touring in Michigan for 41 years, ever since she left Harvard/Radcliffe in the late sixties to immerse herself in the depths of folk music & the blues, committing herself fulltime to her music, Raitt talked about how wonderful it was to be back on the road and how much fun she had taking her bike down the Pere Marquette Trail earlier in the day.
She also made laconic references to the bittersweet ironies of aging, which now at the age of 62 find Raitt fully focused with a finely polished and carefully honed depth to her performance that can only come from the type of wisdom and practice that experience delivers.  “When I was younger I used to be so optimistic,” joked Raitt, “but nowadays I'm just grateful.”
Moving through a two-hour performance that included hits such as her 1994 hit single Love Sneakin' Up On You' and I Can't Make You Love Me to newer material off Slipsteam, along with an excellent reggae-infused cover version of Gerry Rafferty's Right Down the Line and Bob Dylan's Million Miles, Raitt was moving on impulse, changing her set-list as she moved through the evening and leaving the audience mesmerized by both her humility and humanity.
In 2000 Raitt was inducted into the Rock & Roll Hall of Fame and she'll be touring behind her new album through November.  Hats off to Matrix: Midland organizers for bringing such a welcome performance to the stage of the Great Lakes Bay.