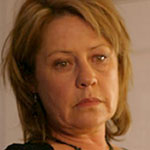 Christopher Weekes made his engaging new film Bitter & Twisted at the age of 24, with little money and pulling every favor on the planet in order to complete his vision. He premiered it at the Tribeca Film Festival one month ago. The first feature film he's written or directed, the auteur notes "I wanted to write a movie that showed Australia in a way it's not normally presented, without the bush and beer cans.  The Australia I grew up in was more about frozen chops, power lines and driveways."

Bitter & Twisted is a multi-narrative drama of longing and loss, starting with the death of a young man and flashing forward three years to assess the toll it took on all those around him. Though it's not as heavy as it sounds, interjecting more quirk and humor on show than darkness and depression.

"I'd tried to get into virtually all of the film schools in Australia and couldn't even get short-listed," he explains. "I tried to make a few short films, but they turned out horribly.  I just wasn't inspired enough.  My passion always seemed to be in long form.  So I gave up after a while and focused on making a 90-minute film, no matter how long it was going to take.  My theory was that I'd rather spend five years to make a feature film than spend six years and make three short films."

"I know it sounds ridiculous, but I've felt over the hill since I was twelve, so when I turned twenty and still hadn't managed to prove to the world, and myself, that I could actually write and direct something - I basically stopped trying to apply for schools and began thinking of other ways to make it happen.  Besides, most of these places charge almost as much for three years of tuition as it would cost to just turn around and make something, so I really was jumping into the project thinking of it as my "education"."

"I had only just turned twenty four when I finally managed to coax a cast and crew into taking a chance on this young guy who wrote a film in the back of his parents house, and to make it even worse I was paying for the whole film myself with what I was able to save up from working two jobs in between shooting.  To say it was challenging is probably an understatement."

"I wrote the first draft at 19 and tried for years to get people just to even read it, but it's hard to be taken seriously at that age - especially when you've never done something before.

""The real break came when I begged my best mate from school to drop a copy of the script in Noni Hazlehurst's (below) dressing room on the set of Better Homes and Gardens.  Noni is this incredibly well known and respect actress in Australia who had been out of the "movie business" for some years while she worked on a variety show.  I'd written the main part of Bitter & Twisted with Noni in mind from the beginning.  I've seen her play so many roles, on stage and on screen and knew she could do such an incredible job with the character. Luckily for me she called the next day to say she loved it."

Did Christopher find it difficult to write, direct & act in this film and retain a sense of balance about the production?

"To be honest I found it easier to direct scenes when I was on camera than the ones when I was off.  Acting allowed me a closer proximity to the truth of certain moments, and so sometimes really interesting performances came out of that process.  Because I'd created storyboards for the entire film in a computer before hand, a large majority of my time on set was spent with the actors.  The crew already had a template that they were working towards. I could talk to camera and show them exactly how I was hoping to frame and color a scene, then walk over to the actors for a few minutes while all of that was being set up. It saved a great amount of time in the long run doing things that way."

"Auteur" is a word I don't really sit well with.  Films are meant to be a collaboration.  A good director is just a bad director who surrounds themselves with talented people."

"This film doesn't look at all like any other Australian film you might have seen before. The cast, the crew and myself worked really hard to try and bring a dream-like quality to what's on screen. The story has all the usual themes of love, loss and grief you might expect from an indie film, but the characters here are anything but ordinary. Plus, if all else fails, perhaps you'd be interested to see what a film looks like when you have no money, a crew of 15 people and 20 days to shoot something, and a resounding refusal to give up on ourselves."

"But more than anything, I wrote Bitter & Twisted wanting audiences to walk away with a sense of hope.  Grief isn't about how and why somebody died, it's about the people that get left behind.  Death is something the living feel.  Life is too short to be wasting time - trapped in time. That's essentially what the film is about.  There can be hope even in the most hopeless of situations.  But all that said, I tried hard to make the humor and quirkiness of these very strange and funny characters fun and enjoyable to watch. Above all things, movies are meant to be fun."

Weekes presently has two new projects in various stages of production - a U.S. series based on Bitter & Twisted commissioned during the Tribeca Film Festival, and another feature, which might be shooting by the end of the year in New York.

"I was really trying to do something positive with an incredibly negative time of my life after my mum died.  I never in a million years dreamed it could have taken me on such an incredible journey as it has.  For a while I imagined it was going to be this home movie I'd pull out for my friends when they came over and I'd be screening it on my lounge.  Now only a month or so since it's been finished it's been seen all over the world, from New York to Sarajevo, to Montreal and Dungog.  It really has been the most incredible journey.  You couldn't script it this well."