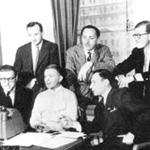 As The Bay City Players embarks upon its new season within the conflux of unsettling times, it is entirely appropriate they have chosen to inaugurate their 2010-2011 performance season with a production of Neil Simon’s Laughter On the 23rd Floor.

More than any contemporary playwright, Simon has managed to consistently tickle America’s funny bone with a proven track record of box office success through a litany of memorable productions ranging from The Odd Couple to Biloxi Blues, The Goodbye Girl and Plaza Suite.

As a young unproven talent living in New York City back in the 1950s, Simon managed to secure an internship working for the legendary Sid Caesar on his weekend comedy television showcase, Your Show of Shows, which was both a precursor and blueprint for contemporary comedic sketches as popularized today in current shows like Saturday Night Live.

Simon went on to chronicle his experiences working with the likes of Caesar, Woody Allen, and Elaine May (whom also pledged their resources to writing for Caesar during this incubation period of their careers) with the creation of Laughter on the 23rd Floor, which involves the tale of 6 men and 1 woman working as comedy writers for America’s most popular TV star.

Given the rich memory of those experiences, the script that Simon produced is tight, concise, witty, fast-paced and the perfect antidote to brightening one’s soul in troubled times.

Directed by Michael Dunckel and Tina Sills, both share impressive backgrounds working with Bay City Players. Dunckel has been actively involved with the organization since 2002 when he was asked to take a role in the production of 1776, which was also being directed by Sills. He also served as assistant director for three other productions by Bay City Players and earned roles in Titanic, the Musical and a newly written play, A Shine on Your Shoes, directed by Leeds Bird and Kevin Cole. Last season he was one of four directors that worked on The Producers.

Tina Sills involvement with BCP spans 25 years, during which she has twice served as Board President. Indeed, the first production she directed was another Simon classic, Brighton Beach Memoir, and since then she has directed several of Simon’s plays, including Lost in Yonkers, Jake’s Women, The Odd Couple, and 45 Seconds from Broadway. “To say that Laughter on the 23rd Floor is one of my favorites is an understatement,” she notes.

Given that the new season of Bay City Players is commencing with such an ambitious ensemble piece covering the fertile ground revolving around the ‘Golden Age of Comedy’, what do the two directors feel are some key factors distinguishing this production from the prolific lexicon of Simon’s other work?

“I would point to the characters themselves,” reflects Dunckel. “When I think of Neil Simon works, I think of Brighton Beach Memoirs or Biloxi Blues first, which are works with a certain biographical edge. It is Simon writing about his own family, while changing names to protect the innocent. In Laughter Simon continues this tradition, but to the next level. The characters in the play are based not on Simon’s family, but on actual comedy writers from Your Show of Shows and The Sid Caesar Hour. They represent real people, Woody Allen, Larry Gelbart, Selma Diamond, Carl Reiner, Mel Brooks, Sid Caesar and our course Neil Simon.”

“I think it is truly an homage to Sid Caesar and all those writers that Simon learned from and began to hone his craft through,” explains Tina. “It is not as sentimental as it may sound and as many of Simon’s other works are. This one makes a statement about the political poison permeating our country at the time and the lasting effects that McCarthyism had on the arts and the devastation to may lives of people in movies, television and Broadway is such a tragedy.”

“Sid Caesar was willing to take on the network (NBC) but most importantly, he didn’t see American television viewers as idiots, which is something that I am not sure the network programmers can say today.”

Given that much of comedy’s impact has to do with timing, has it been difficult or challenging to work with an ensemble of actors that all need to integrate and play off each other in terms of delivery and flow for the jokes and script to work?

“Our cast is relatively small with only 9 cast members, 7 men and 2 women, so with the exception of two individuals making their BCP debut, the remainder of the cast are all very seasoned performers,” notes Dunckel. “While the play is set in the writing room of a weekly comedy show, you don’t really experience the characters ‘writing’ jokes. They are just funny people who the audience gets to observe in their daily routine.”

“What can often be the hardest thing to deal with when doing comedy is when we perform in front of a live audience. You never know what will make someone laugh one night and not laugh the next, which is when comic timing comes into play. How long to hold for the laugh without milking it before proceeding with the next scene.”

“Comic timing is always a challenge,” admits Sills. “Particularly when for most of the show 8 of the 9 cast members are all on stage. It’s a matter of not only learning the lines, but you need to listen and be aware of not only your presence, but of others, and react as your character. We are fortunate to have an ensemble that has a good mix of some seasoned actors along with those just starting, and the interaction has been heartening to watch unfold.”

In addition to Dunckel, who is taking a role in the production in addition to his directorial duties, the cast for Laughter on the 23rd Floor consists of Michael Wisniewski, Marty Hofelch, Robert Graczyk, Mary Lee, Eric Sprague, Jerry Dennis and newcomers Kyle Berzold and Christin Wendt.

As directors, is there anything different about the focus in terms of direction that they are incorporating in order to give a unique spin to the translation of this production?

“Quite honestly one of the biggest challenges we’ve faced from the start is the adult language found in the script,” admits Dunckel. “We know going into this production that there are ticket holders who might not come to see the show because of the language; actually, because of one word in particular that rhymes with ‘duck’. As we have stressed with the cast, this word isn’t meant to be shocking, it is simply a word that these people use in their everyday life. It basically serves as an adjective in describing something, whether good or bad. As one character observes, “If I worked in France, I’d speak French, but I don’t, I work here so I speak (blank).”

“Sometimes I think just getting 9 people all on this set is a challenge,” laughs Tina, “but actually the biggest challenge is making sure all the components mesh and come together into the vision we have for the production. Since last Spring I’ve been thinking about the atmosphere of live television, and in particular, this writing staff. So I wanted it to be my own tribute to them. Everything from our lobby display to music used for pre-show to props hopefully will support that vision.”

“This play is set in the early 1950s and we strive to get that across to the audience right from when the curtains open and the lights go up,” concurs Dunckel. “During auditions almost all the men who read for a part had some facial hair and in one case a long pony tail. Everyone agreed from the start they would be willing to shave and cut their hair to fit into the time frame of the play.”

“Our props department has started gathering items from our own store rooms, but from other sources including eBay to find the right pieces. Honestly, there is almost as much work that goes on behind the scenes as what takes place on the stage for every production.”

“This is a show with some very mature language, but it is not as shock value,” concludes Tina. “It is simply the way these folks spoke to each other. What is really important to me are the ideas behind the script and not the language.”

Beginning in 1917 as the Bay City Art Club, Bay City Players is the oldest continuously operating community theatre in Michigan. Laughter on the 23rd Floor will run September 24-26 and September 30 – October 3rd. Performance times are 8:00 PM Thursday through Saturday and 3:00 PM on Sunday. The box office will open on Monday, September 20th and tickets may be obtained by phoning 989-893-5555 or visiting www.baycityplayers.com. The theatre is located at 1214 Columbus Ave. in Bay City.