An Anatomy of Gun Violence (Part 2)

Posted In: Politics, National, Opinion,   From Issue 763   By: Matt deHeus 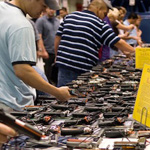