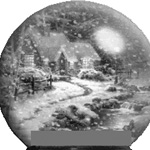 John Burt, founder of Duro-Last and great friend & mentor to Rayleen & Tom Lawler, strongly felt if you believe in something and eel it the right thing to do, then its best to 'do it now' Inspired by these wise words, the Lawlers wanted to give money to the church and thought with some help at the parish level, their donation could multiply five times. Based upon Mr. Burt's belief and their own devotion to their church, Rayleen and Tom formed ACT Now, LLC.
Its missions is three fold:
* Produce & record beautiful music
* Give the discs to churches & nonprofit organizations to sell at a low cost
* Support missions by giving those organizations 100 percent of the revenues
With these parameters in mind, 10,000 copies of Graceful Voices, a CD filled with beautiful Christmas music was produced by ACT Now. Each disc can be sold for $5.00 and 100 percent of the proceeds from the sale will go to whatever purpose a Church or non-profit designates. It may be a for a youth group, a needy family, a music program, a mission trip - whatever is determined to be a worthy charitable cause.
Groups other than churches and nonprofits may participate with the understanding that any proceeds will go equally to two entities: The East Side Soup Kitchen of Saginaw and Called to Serve, a charitable organizations which distributes food & clothing to the needy in Detroit.
Tom Lawler served as Executive Producer of Graceful Voicesand began the action needed to be successful. Over the years he heard the beautiful voices of Roberta Conley, Hope Comerford and Laura Wolohan, the three-featured singers, well known to the Lawlers and to many in this area.
Believing this would be an opportunity to showcase their talent, tom asked them to participate in the venture. Music & lyrics for one of the 11 songs on the disc, Soon & Coming King are credited to Ron Haeske. Recorded, mixed and mastered by Andy Reed at Reed Recording, Co. in Bay City, additional musicians consist of Andy Reed, Dennis Owens, Donny Brown and Roberta Conley. Knowing of the mission of ACT Now, several would not accept payment for their services, or rendered them at a considerable discount.
The 10,000 CDs packaged 100 per box are available now. Any church or non-profit corporation interested in participating in the program may contact: ACT Now, P.O. Box 6115, Saginaw, MI 48608-6115 or via e-mail at actnowllc@gmail.com
Graceful Voices will help launch a very Merry Christmas season. Not only are the songs beautiful and inspiring, each disc that sells will provide 100% profit to each church or charitable organization that participates in the sale.