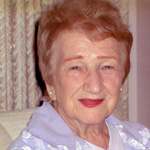 Suddenly it happens, out of the blue. In this instance, it was 10:30 AM on a beautiful Saturday morning. I was working on a deadline, as I have for 635 issues, hoping to finish up by early afternoon so I could go have lunch with Mom on the patio, watch the tulips wave in the soft, warm, and welcome embrace of a much-needed breeze of early Spring, maybe sip a little champagne and talk about local events, when the call came.

"Bob, I think I'm having a heart attack."

And in a split instant, everything changes in a crystal clear shot of panic and clarity dangling right before your eyes. So you call 911 as you're racing 70mph down a 40mph street, meeting the ambulance at the front door in less than five minutes, racing into the house faster than a thoroughbred on Derby Day, and.... you see her. And you just *know*. Life as you know it, and the umbilical cord that brought you into this world, has been ripped right from your belly, and it will never be the same.

Jessie E. Martin, beloved mother, wife,  friend, and inspiration to all who came to know her, passed away suddenly on the morning of Saturday, April 21st in her home at the age of 87.  Born October 4, 1919 to Louis Max Zschoerner and Agnes Nickodemus, Jessie lost five of her brothers & sisters, along with her parents at the age of eight, when they were taken away suddenly from her in an automobile accident in November of 1927.  Jessie and her brother Fred survived this tragic loss, as they were the youngest siblings in the family and staying at home with a babysitter when the accident occurred. Her family is buried in Forest Lawn Cemetery.

Subsequent to this shocking loss, Jessie and her brother were taken care of through their estate, which was set up at Second National Bank Trust Department. Her appointed guardian, Franz Dreier ( next door neighbor of the family) took care of the two children through their formative years. When he passed away, his wife Caroline Schafer Dreir assumed these duties.

Upon graduation, Jessie worked at General Motors in Saginaw until May 10, 1952, when she married Fred Martin, Jr., a noted trial attorney and co-founder of the Martin & Martin Law firm in Saginaw.

In 1954 the couple gave birth to their only son, Robert E. Martin, founder & publisher of Review Magazine.

Active for many years with the Saginaw Lawyer's Wife's Auxiliary, The Saginaw Wolga Club, Elks Club, and The Saginaw Country Club, Jessie is survived by her son, Robert, daughter-in-law Michele Horstman, sister-in-law Betty Armstrong, and a host of close cousins and friends that continuously remained enamored by Jessie's warm and giving soul, her pleasant and generous nature, and her uplifting humor, compassion, and intelligence.

Jessie loved life for all the beauty it had to offer and addressed life's challenges with an indomitable spirit and positive nature, largely borne from the strength she cultivated by confronting the challenges presented by such great personal loss of both her parents & siblings at such a young age.

It is this strength of spirit, generosity of soul, and the radiance and warmth of her smile that will resonate through eternity.

As a near & dear friend put it, she possessed 3 increasingly rare qualities these days: an understated sense of humor, selflessness, and an an unerring ability to see the positive side of any negative situation.

At the funeral home, the Pastor studied the myriad of photos spanning the decades of her life that I had collected from a now empty home and said, "In looking at all these pictures I see that god painted a beautiful smile on your Mother's face and that she knew how to use it."

What is a Mother? Apart from possessing the obvious link to creation through the marvels of her womb, there are a myriad of attributes more complex than the colors revealed in a rainbow.  Whether you knew her well, or had just made her acquaintance,  there was nobody not touched by any of those seemingly random shades of nourishment, nurturing, friendship, and love which she radiated.

Life is full of miracles, and I have learned an important one: even though she is gone physically, her spirit is within me - as it is with all she came in contact with - because if you look closely enough, it is all around you....confined by nothing so primitive and fragile as our bodily vessels of fragile flesh.

By embracing and cultivating the positive attributes which my Mother  conveyed so naturally,  that bone shattering sense of loss - of emptiness - is divinely replaced with the marrow & flow of love and solitude which ultimately epitomizes her very being.

My mother was no stranger to loss, having her own mother, father, brothers, & sisters, taken from her at such a young & tender age.  And I remember distinctly, when my father passed a few short years ago, and I was totally lost in tears & grief, she embraced me, looked me in the eye, and said, 'Bob - I've been alone for much of my life, but through the grace of God, and the strength of our own hearts, we'll get through this together, because Dad is inside of you, as much as he is inside of me, and if we really need him, he's not far away. Simply look inside of yourself, talk to him, and he will be there'.

Ultimately, what I have realized over the past few days, is that this is the truth of mortality - we are all God's children, and if we look inside of ourselves, we can talk and feel not only the love of our parents, but most importantly, our heavenly father.

What will I miss about my Mother? The list is too long, and heart wrenching to go through, because they are talents that can never be replaced, only emulated.

Her ability to see the positive aspects of a seemingly bad situation; her thoughtfulness; her delicious kugels, graut barokes, and other traditional German delicacies which are becoming a dying art; turkey dinner on Thanksgiving; her willingness to lend a hand and take on any thankless task - whether it be using her U of M education to average scores and handicaps in longhand for The Saginaw District Golf Tournament, or doing my billings for The Review every two weeks  - all of this I will miss.

But true to her nature, I can hear her whispering now... 'Son, don't view my passing as a loss, view it as an inspiration.'

So yes, miracles do happen.

In closing, I wish to recite these words from Theodore Roethke's poem 'Open House':

my secrets cry aloud, I have no need for tongue my heart keeps open house, my doors are widely swung, an epic of the eyes, my love, with no disguise.